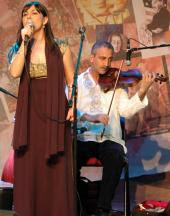 
One winter evening I met Amal Murkus the first time: Saturday January 19, 2002.
I listened to the radio, HR 2, 'music boundless'. The recording of a concert in the 'Centralstation'
in Darmstadt from November 8, 2001: "Songs of Hope – Lieder der Hoffnung“,
Amal Murkus and Chava Alberstein.

The names of the singers I've never heard before: Amal Murkus is a Palestinian
and Chava Alberstein is Jewish. Both of them are citizens of Israel. It seems like a miracle
that they can be heard at this time in a concert, even when they are not together
on stage. I put spontaneously a tape in my very old tape recorder and cut the broadcast.
I do not know what to expect. I could not know of course, which consequences
will have this evening for me.

Amal Murkus first sings 'Ya Oud', a capella, the song of the oud, the ancient Arabic instrument. Her song touched me immediately, her beautiful, unique, distinctive
voice enchants me, she touches my heart. This continues with every other song
I hear of her on that evening. Since Janis Joplin I had not such an experience.

The broadcast also introduces some translations of the lyrics and Amal Murkus
comes to speak. She talks about her music, about the people for whom she sings, she
talks about the importance of this musical evening, what she and Chava Alberstein
separates and what they have in common, she speaks about her longings and dreams,
about the nature with which she feels closely connected. She feels herself as belonging
'to the human part of the world'.
In the 'Song of the passport' Amal sings '... the hearts of all human are my nationality,
free me from this passport." 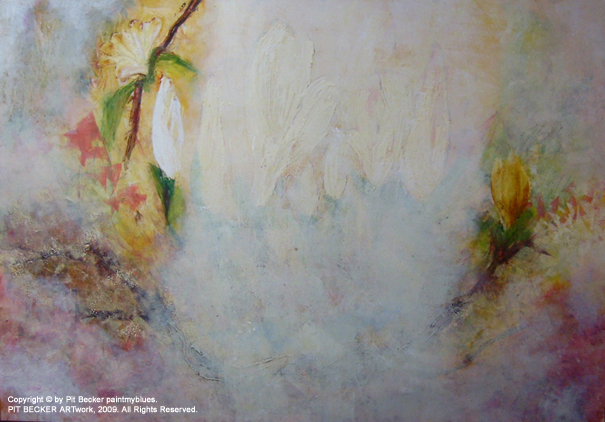 This evening on the radio it has touched a great deal. The music of Amal Murkus
did not leave me and since then is with me every day and now belongs to my life.
About seven years I kept hearing these few songs by Amal Murkus. Then I found
her page on myspace and so I found more songs by her. Amal Murkus has published
three very different albums. Each one is great in itself, full of love for people and for
nature. I always discover something new when I listen to it.

For her first album, from which I already know some songs, Amal Murkus has given
her beautiful name as the title: 'Amal' means 'hope'. Her second album 'Shauq' (Longing)
was recorded live in 2004 in the Crown Hall in Jerusalem, with the Symphony Orchestra
of Jerusalem. Amal published her third album 'Na'na' ya Na'na' (peppermint) in 2007.

Her songs tell of the everyday life, of the past and of the present, of escape and
of wars, of battles, of social upheaval, from the harvest, marriage and birth, cheerful
women, couples, wanderer, of farewell, of nature, of pain and love.

Her voice may sound sad in some songs, but Amal always give hope. She gave
me hope often enough in all those years, in which more than one time there was
no horizon for me to see and all doors were closed. As if hope alone would not be
enough for me, since one year Amal Murkus gives me with her music even more:
she gives me inspiration. On my various projects, her music took great influence
on the subject, took effect on the design, and she had changed and expanded my
palette of colours and she inspired me with her beautiful songs to images. 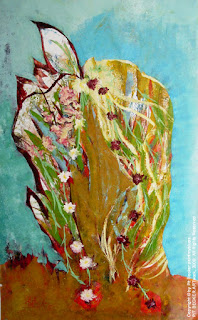 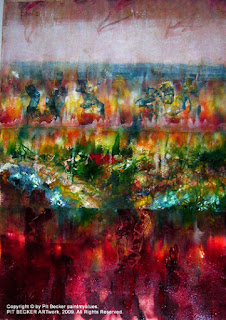 Amal Murkus's is rejected by all major Israeli record companies.
Palestinians holding an Israeli passport will denied entry into
most Arabic-speaking countries, and in their own country they
are often seen as "internal enemies". Amal fights constantly
against the exclusion and disregard of Arab music and culture
by Israeli media.

Amal Murkus was celebrated by the Austrian television in 2001
as one of the most beautiful voices of the 20th century.
She sees herself as a "Palestinian singer," and believe that her
national pride are the causes of the discomfort of many Israeli
Jews. Her feminism has caused several controversies with the
Islamic Movement in Israel.

“I suppose that the people from the Islamic Movement are
bothered by my social agenda. I criticise not only the Jews, but
also what is happening in my own society. I call for the liberation
and empowerment of women. If they do not progress, society will
not progress.” 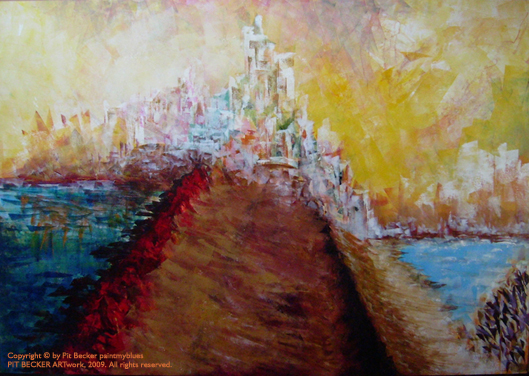 There is space enough

“I think that my songs make the occupation and Governments afraid.
These are things that give me a lot of hope.
When I know that the majority is affected by my songs,
when I know
that armies are afraid of me as a singer,
I’m very happy.
This gives me a lot of hope, because I feel I have power,
that I have an instrument that is named ‘culture’.“ 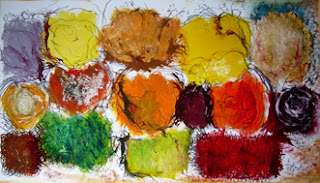 “I am connected to the land,
not only from a nationalistic position.
I love nature, I love trees,
I love everything that’s connected to seasons.
So my songs manifest feelings and manifest agendas
of the Palestinian people,
but also manifest a lot of universal agendas
of all the people of the world.
When you love and I love,
when you hate and I hate,
and when you long for something …
I don’t think we have different feelings.
People all around the world love the same
and we are the same.“ 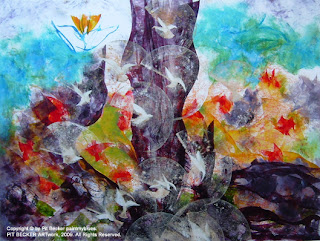 “It’s important to me that people know where I come from, so you can understand that there’s a Palestinian minority that still exists in our original land and villages. We still speak Arabic and have Palestinian culture. We also try to make some  changes in the Israeli state, by voting for Palestinian members in the Israeli  Parliament, and by being part  of decisions – political and social – in Israel. I am also part of the Palestinian people who are in refugee camps in Jordan, Syria and Lebanon,  and Palestinians who are refugees
in Europe.“


“Any artist in the world
takes material from daily life
from the history of their people.
For me, that’s from the poems of the Palestinians,
from the stories of my grandfather and grandmother.
When I began to sing as a child,
I chose to sing songs about refugees
and about the land
about the dream of building a home
the dream of a white dove
a world of peace.“ 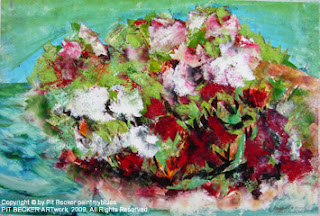 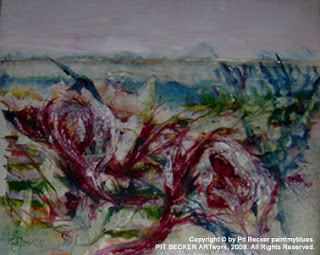 AMAL MURKUS is a Palestinian singer and actress, born and raised in Kufer Yasef
in Galilee, Israel. She dedicates her career to promoting Palestinian music and culture
in Israel and abroad, against all contempt and exclusion.

Amal is a member of the counselling board of FREEMUSE,
an organization against censorship of art and music.
She took an active part in its congress in Denmark in 2003.

Amal is currently studying art in Musrara College in Jerusalem.

Amal's career starts when she was five years.
1979 she won the first Prize in the national Arab children's song festival.

Graduate Institute for Stage Art, Tel Aviv, 1990. An accomplished actress,
Amal has TV appearances in educational and cultural programs. Many awards
for her unique art and music and for her work with local communities.

Projects with the Palestinian poet Mahmoud Darwish in 1999 and 2000.

Amal was nominated for the Israeli Oscar for her performance
in Ali Nasar's movie "The Milky Way".

Amal Murkus won the award for Best Actress
at Haifa Theatre Festival in 2003.

Collaboration with other artists and musicians such as Joan Baez, Mercedes Sosa,
the Royal Philharmonic Orchestra of Liverpool.

Amal also regularly appears on radio, and her cultural programme can currently
be heard every Friday on Radio ASHAMS 98.1-101FM, from 11.00 to 1.00 clock (Jerusalem time). For further information see www.ashams.com 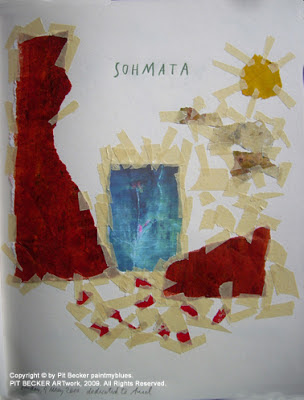 Amal,
You sing the beauty of the
colours of the world
and of life
as well as you sing of pain
and death,
of love and desire

You sing of blooming
gardens and dreams,
and the sound of the oud
and to the despaired of this
world you give confidence

Flocks of birds rise
from the sea of flowers
of your hope
and they bear more,
over all the oceans of time

and my heart sings
Amal 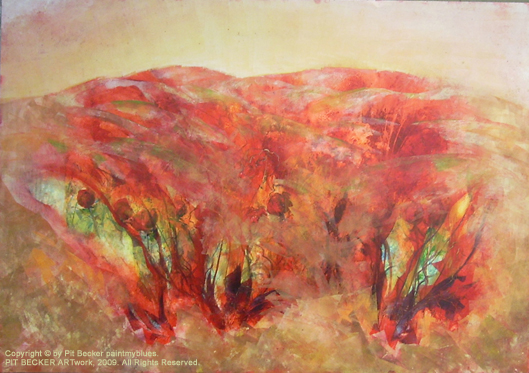 In 2011 Amal Murkus has published a new Album: "BAGHANNI".

Please notice that I had deleted my myspace-account in protest
after myspace's "new" "design" had destroyed our pages with lyrics,
photographs, messages and comments.

The text and paintings were first published
in my NewsLetter PIT BECKER ARTwork, September 2010

Lyrics of "Amal, you sing the beauty ..." © by Pit Becker paintmyblues

My Poems to the Sea 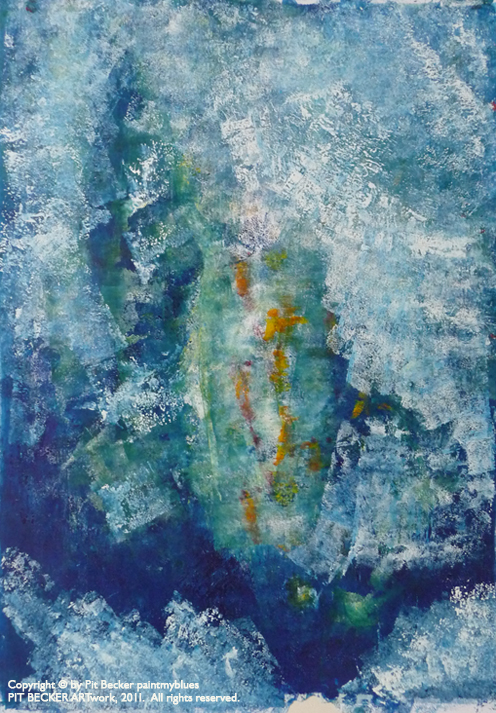 My poems to the Sea, Variation 13 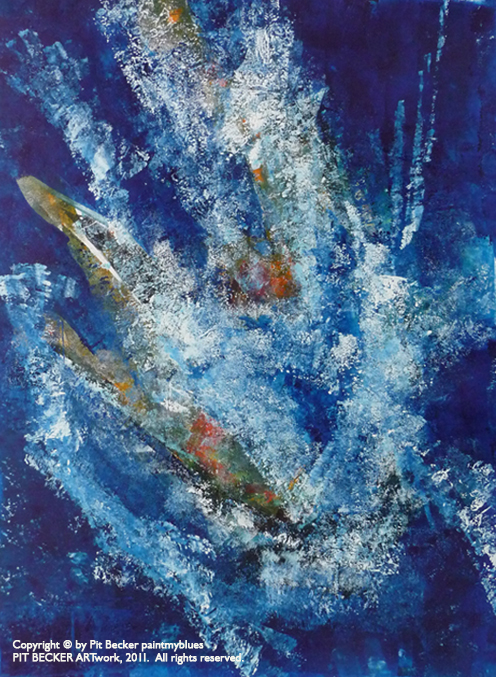 My poems to the Sea, Variation 14 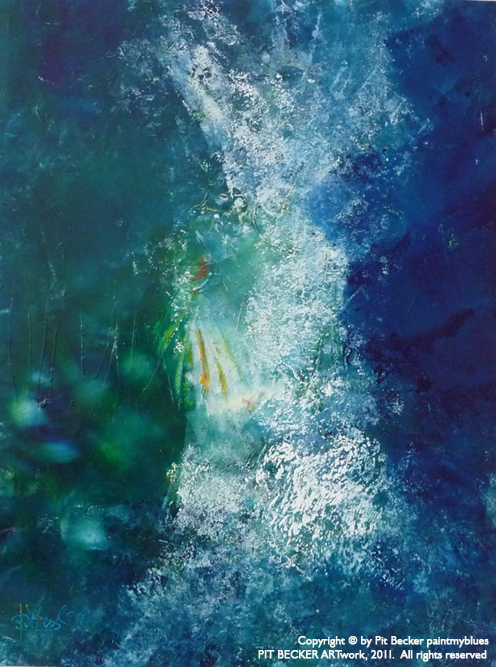 My poems to the Sea, Variation 15

This is my dance,
my love and longing,
my sadness and joy,
my hopes,
my soul,
my song
and
my painting.
That's me,
paintmyblues